For over seven years now, dozens of mosques across Kuwait have been equipped with Hortus Audio sound systems to support thousands upon thousands of people in their daily religious practices. Hortus Audio, a pro-audio manufacturer based in Montpellier, France, and Our Style Sound Systems Center, a distributor and integrator based in Safat, Kuwait, have been partnering to meet the acoustic needs of Kuwaiti government-run mosques, as well as privately-run Kuwaiti mosques.

On a project-by-project basis, Hortus Audio has rolled out hundreds of individual loudspeakers for Our Style Sound Systems Center to distribute and/or install. In the latest collaboration, Our Style Sound Systems Center and its local partners have measured, tested and installed a robust Hortus Audio sound system in the state-run Al-Hajraf Mosque in Al Jahra.
The Al-Hajraf project got underway in Q4 2019 though like so many others it went on standby during much of 2020, amid the ongoing pandemic. With only the acoustic treatment panels left to finalize, the sound resonating within the 50-metre-long x 80-metre-wide x 10-metre-high mosque is set to be broadcast on television during the upcoming holy month of Ramadan from April 12 to May 11.

The dynamic audio setup at Al-Hajraf Mosque consists of 22 CT6.1, eight CT30MKII, and two SAM8. The CT6.1 is a two-way passive loudspeaker that Hortus Audio manufactures and customises for the Kuwaiti market. The S6.1 is its equivalent for the rest of the world. The 240W RMS CT6.1 tends to be used in 16 ohms after having been placed in a systematic manner along the walls of a Kuwaiti mosque. Like the 200W AES S6.1, the CT6.1 is available in both eight and 16 ohms. For the S6.1, the maximum sound pressure level is 115 dB while the CT6.1 can attain 119 Db.
Ensuring balanced sound throughout Al Jahra’s biggest house of worship became the critical challenge prior to and during the installation. Solutions had to be devised to mitigate excess noise while overcoming the reverberation time for the sound pressure level to decrease by 60 Db. The 22 CT6.1 were meticulously positioned to address different RT60 values that would emanate in
and around the columns. The picture below exemplifies how the Hortus Audio loudspeakers intricately transmit sound between pillars, different heights and a variety of designated spaces of worship. 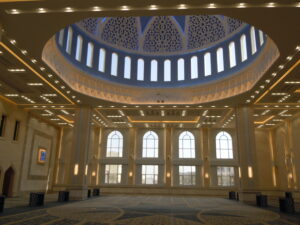 The loudspeaker alignments were especially fundamental in relation to the marble walls, high windows and the dome centerpiece. Earlier this month Mr. Riad Al-Laho, the Head of Our Style Sound Systems Center, observed that “each corner and place has been covered thanks to the CT6.1.’’
Each of the two-way passive 150W CT30MKII in 16 Ω as well as the pair of 250W AES 8’ SAM8 (as shown below) reinforce the CT6.1 output. Together the loudspeakers help to immerse
one’s personal religious experience amid measured and powerful sound.
The uniquely designed Hortus Audio background within Al-Hajraf Mosque is a similarly distinct feature of wide-ranging Kuwaiti houses of worship. Hortus Audio and its partners remain
actively committed to developing pioneering products and projects despite the very difficult and complicated circumstances worldwide. 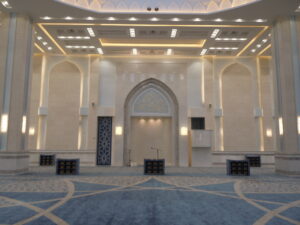 We design and manufacture professional sound systems to meet the international market’s needs.